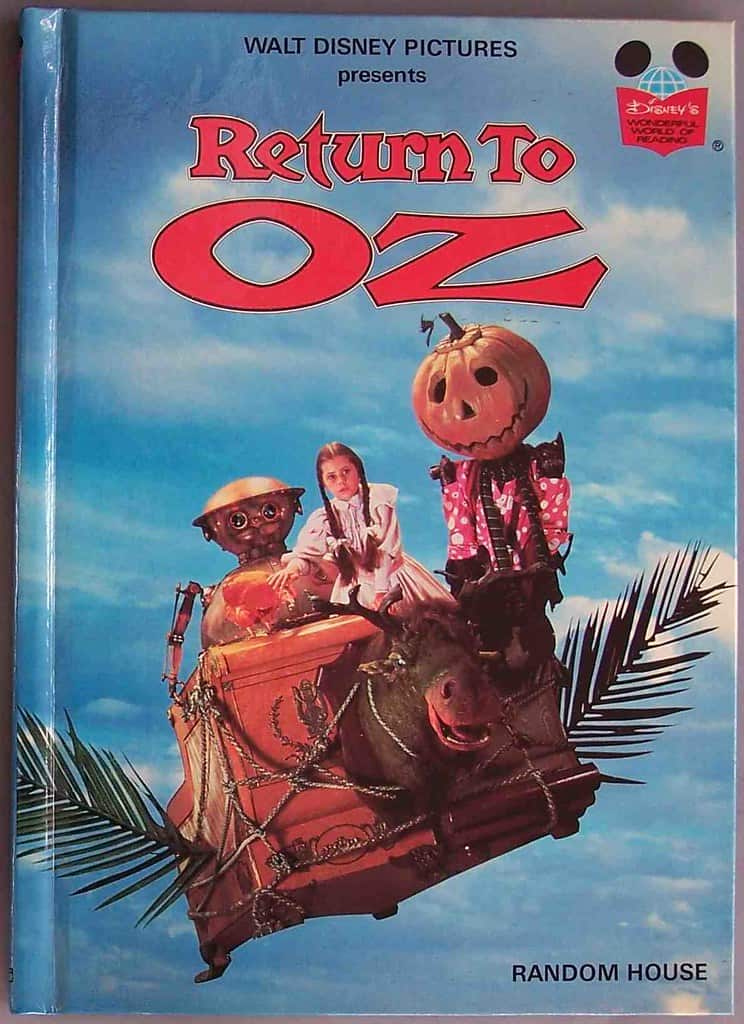 All the precious stones in the world are made here in my underground dominions. All made for me by my Nomes. So, imagine how we feel when someone from the world above digs down and steals my treasures. All those emeralds in the Emerald City really belong to me. I was just taking back what was mine to begin with.

Thus the Nome King justifies to poor Dorothy his terrible actions, namely the destruction of the Kingdom of Oz and the transformation into statues of all its inhabitants, including the Scarecrow, the Tin Man and the Lion. He will soon reveal to her that even her Ruby Shoes now belong to him: the deus ex machinathat had solved all the problems in Dorothy’s first voyage is now a weapon of the enemy.

If the first trip to Oz was a dream, this second is a real nightmare.

Not that the world of human beings offers much more hope: Dorothy had risked electric shock and internment in a psychiatric clinic before her escape, as one might expect to happen to a little girl who raves about crazy fantasies in the rural Kansas reality of the early twentieth century.

Although the imagery of the world created by L. Frank Baum is normally associated with the colorful and festive images of the 1939 movieThe Wizard of Oz by Victor Flaming, a certain darkness has always been present, as in any self-respecting fairy tale. The original illustrations of the books have always been halfway between the grotesque and the Gothic, and even the positive characters often have a disturbing duality, such as the Tin Man, who in addition to having a backstory worthy of a Greek tragedy, he doesn’t mind violently slaughtering several creatures with her ax.

The original film softens many of these rough edges of the original work, but at the same time adds loads of unease for the modern viewer.

One cannot fail to be distracted during the vision by the awareness of the tragic life of the protagonist Judy Garland, an incredible artist who had the bitter destiny of being remembered by everyone as the interpreter of the innocent girl Dorothy, she who could never be truly a child.

The stellar success of the film prompted Disney to buy the rights to transpose the sequels to the original book, as soon as it was possible: yet it waited for the deadline to decide to put the sequel into production, a good forty-six years later. Walter Murch was called to direct, on his debut as a director after a career as an editor and sound designer for negligible movies such as The Godfather, The ConversationandApocalypse Now, among many. Needless to say, the experience on the set was as problematic as the original, with the same budget problems, the creation of costumes and sets as well as the difficulties of interacting with a very young actress, Fairuza Balk.

Murch was even ousted entirely, and only his friendship with George Lucas and Steven Spielberg allowed him to return and finish what will ultimately prove to be his first and last film directorial assignment. The movie was not an immediate success, but over the years it became part of that lineup of films cult from the 80s designed for an audience of children but with such dark and shocking elements to be remembered with a mixture of nostalgia and restlessness even in adulthood.

This tendency is emotionally linked to the intellectual game that has always prompted certain criticism to analyze (some would say super-analyze) works aimed at children in an attempt to find allegories and semblants of complex theories about history, psychoanalysis, politics.

Baum’s original literary work is probably one of the best examples of these analyzes, surpassed perhaps only byAlice in Wonderland by Carroll: the historian Quentin Taylor proposed, for example, an allegorical reading of history, in which the Scarecrow represents the peasant class of the Midwest, the Tin Man the metallurgical working class and the Cowardly Lion the army returning from the not exactly exciting performances during the Spanish-American war.

Taylor also read in Dorothy’s opponent, the Witch of the West and her Flying Monkeys, the signs of another threat perceived by Americans in the West at the end of the 19th century, namely the indigenous natives of those lands about which Baum actually wrote articles, even invoking their total extermination as a sort of euthanasia to free them from their miserable conditions. Whether he was serious or deliberately sarcastic, in style of A modest proposalby Jonathan Swift, it is still a matter of debate.

Taylor’s analyzes, however, started in response to one of the most famous readings of the Wizard of Oz , although full of inaccuracies and forcing: in 1964 the historian Henry Littlefield theorized that the thematic pivot of history was none other than the debate about the monetary policy of the United States of the time, divided among the supporters of the Gold Standard and those of Free Silver. Gold would be represented by the Yellow Brick Road that the protagonists travel to get to Oz, a term that is the abbreviation for ounce, or the unit of measurement of metals in the imperial system; the city, moreover, is green because of its emeralds, like the printed dollars, and Dorothy’s magic slippers in the literary work would be silver (and not ruby ​​as in the films) to symbolize the supporters of Free Silver. The so called Free Silver became a major economic policy issue in the United States in the late 19th century. His supporters, enriched bythe exploitation of the thriving American silver deposits, sided in favor of an expansive monetary policy that provided for the unlimited minting of silver into cash on demand, as opposed to strict adherence to the more carefully implicitly fixed money supplyin the Gold Standard from 1870. The Free Silverbecame increasingly associated with populism, trade unions, and the struggle of ordinary Americans against bankers and monopolists, and the robbing barons of the golden age of capitalism called it people’s money”. On the contrary, the Gold Standard system provided for a close link between the quantity of money in circulation and the gold reserves held by the central bank.

In this system each coin had a fixed metallic parity and therefore the value of the coin corresponded to a certain quantity of gold established by the monetary authorities. The paper money in circulation was convertible, at any time, into gold, so it was necessary to match the quantity of bank notes in circulation and the gold reserves held by the central bank. In this regard, but with the aim of freeing oneself from the coils of the inextricable world of economic politics, it is interesting to report the penetrating comment of George Bernard Shaw, Nobel Prize for literature in 1925: “The most important thing when it comes to money is to maintain its stability, so that over time you can buy the same things with one pound as you buy today and no more. With paper money, this stability must be maintained by the government. With a gold currency, it tends to maintain itself even when the natural resources of gold increase following the discovery of new deposits, due to the curious fact that the demand for gold in the world is practically infinite. You have to choose (as voters) between giving your trust to the natural stability of gold or to the natural stability of the honesty and intelligence of the members of the government. And, with due respect for these gentlemen, I advise you, as long as the capitalist system lasts, to vote for gold”.

Returning from precious metals and their paper countervalues ​​to the humblest celluloid, it is interesting to observe that the cinematographic transpositions obviously remained both imbued with the undeniable symbolic force of the original story, and amplified it again thanks to their greater impact on popular culture: Fleming’s movie triggered also the creation of urban legends as absurd as they are captivating, such as the one about the suicide of an extra in the background of a scene or the perfect parallelism between the film and the album Dark Side of the Moon by Pink Floyd, starting from the third roar of the lion of the MGM.

Murch’s film is even more consciously imbued with psychological and political sub-texts.

The video essayist In praise of the shadows observes on his Youtube channel how the film lends itself to a double reading in an anti-imperialist and anti-capitalist key.

On the one hand, in fact, the inhabitants of Oz have not had problems in the past to steal precious gems in industrial quantities from the people of the Gnomes, embezzling them for the right of conquest and then passing themselves off as victims when the violent reaction of the exploited arrives; on the other hand, the King of the Gnomes is a plutocratic tyrant who accumulates objects and wealth for the sheer pleasure of defining them as his own, crushing in the process not only his opponents but also his cronies, imprisoning them in a pyramidal and male chauvinist power scheme. It is no coincidence that its only weak point is the terror, probably the result of self-suggestion, for chicken eggs, which has always been a symbol of female fertility.

In praise of the shadows also underlines how the film is almost scientifically studied to represent on screen the most common childhood fears collected in psychological tools such as the Fear Survey Schedule for Children: Dorothy is faced not only with darkness, heights, storms and frightening creatures, but above all authoritarian figures who scold her, place her in situations of isolation, force her to carry out complicated tests like in school.

It is no coincidence that the film takes up an expedient present in the original 1939 film (and not in the literary work): in both, in fact, every fantastic character in the world of Oz has a counterpart in the real world, played by the same actor. If in Fleming’s film it is simply reassuring to see how in the end the Scarecrow, the Tin Man and the Cowardly Lion are still together with Dorothy in the form of likeable peasants in the real world, in Murch’s film to know that the King of Gnomes and the Mombi witch are in reality the psychiatrist and her nurse sheds an entirely different light on the mental condition of the little girl.

So are adults right? Is Dorothy really crazy to imagine herself as a saving figure in a fairy world where, despite the horrors, everyone loves her and everything can be solved with kindness and love? More likely, we’re crazy not to do it.